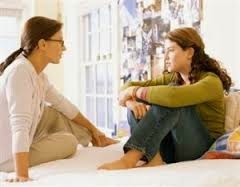 Are you concerned about what your teen is doing on Facebook? Not sure how much you should check on their online life? It can be confusing figuring out how much freedom you should give your teen, especially when it comes to the Internet. It's important that you do not come across as the enemy, otherwise your teen will be likely to do whatever they want in spite of your instructions. Social media has firmly injected itself as an important part of your teenager's coming of age, and as such should be treated with the same respect and caution as other milestones.

Keep Your Teen Safe
It's important that you let your teen know that not everyone online, whether on Facebook or other social sites, are good people.  Of course the majority are but there are a number of predators that actively seek out younger, naive users. In addition, your teen should be warned against the risks of exposing too much information about themselves, whether it is details about their school, their phone number or even their address. Most teens have been only surrounded by good people in their lives and have no real reason to suspect strangers or people they meet online, so it's really important that you stress that they must keep their private information private.

How Much Time on Facebook
If left to their own devices teens will happily spend hours, or even days glued to Facebook. It is, after all, a modern day extension of their social lives and social lives are usually the center of a teenager's universe. When trying to set limits for your teenager's time on Facebook you will be almost always met with defiance; keeping up to date with their friends has become the social norm for many teens.
Depending on what kind of devices your teen has, they might be connected to Facebook all the time by way of their phone. This is much harder to monitor and limit, but you can make rules that their phone must not be brought to the dinner table and that they can't sleep with their phones. Find out what works for your family and be firm about the rules, setting up a Home Contract if you need to ensure your teenager's compliance.

Facebook Friends with Your Teen
Many parents struggle with the fact that their teen does not want to add them as a friend on Facebook - this is obviously because they do not want their parent to see what they are getting up to or posting on there. Some parents are okay, and are happy to accept that in ways Facebook is like a personal diary, something that a teen should be able to have as private.
Other parents are a lot more concerned about what their teens are doing and feel that they should not have a Facebook page if they are not prepared to leave it open. Obviously this is a personal decision, something that will be very much dependent on your family and the dynamic that will work best for you.